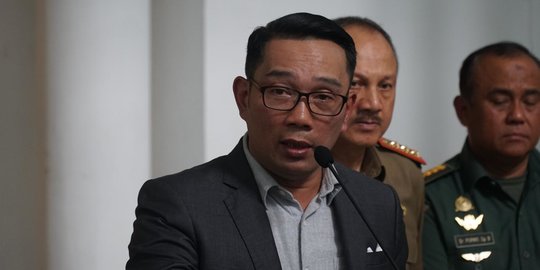 Merdeka.com - West Java Governor Ridwan Kamil said he was concerned about the information that the Minister of Transportation (Menhub) Budi Karya Sumadi was positive of contracting the corona virus (Covid-19). Even so, he believes it has nothing to do with the process of picking up the Diamond Princess crew (ABK) at West Java International Airport (BIJB).

A total of 69 Indonesian citizens (WNI) who became ABK Diamond Princess were repatriated from Japan through the West Java International Airport (BIJB) in Kertajati District, Majalengka Regency. They arrived at the airport on March 1, 2020 around 23:00 WIB.

They were picked up by the Garuda Indonesia airline. In addition to the Governor of West Java, Ridwan Kamil, several officials such as Budi Karya Sumadi, Coordinating Minister for Human Development and Culture Muhadjir Effendi also welcomed the arrival of ABK at the airport.

"I am very concerned about the situation experienced by the Minister of Transportation. But, the media must be clear. If you want to be connected to the Diamond Princess (pickup), you can use logic. Are there positive diamond pirncess crews? Everything is negative (corona). So the argument falls, if you link the positive minister of communication with the Diamond Princess, "he said in the Pakuan Building, Jalan Otto Iskandardinata, Bandung City, Sunday (3/15/2020).

"From sunset until evening, the minister (Transportation) went back and forth to Indramayu to the port. While me and Mr. Doni Monardo at the hotel, in transit. And meet in seconds see and preskon seconds. There was no discussion at all, especially me, there was no physical interaction at all, "he explained.

Meanwhile, President Director of PT BIJB Salahudin Rafi said that he had implemented adequate health and safety standards related to Corona virus prevention (Covid-19), including when he was the pick-up place for ABK Diamond Princess.

He stated, officers routinely disinfect all facilities and spaces located at the airport. The procedure for checking the temperature of passengers leaving and arriving at the airport has already been carried out.

"The KKJ (Port Health Office) KJT Airport Team has conducted and routinely staged a number of efforts so that the airport is free from viruses, all facilities ranging from luggage, escalators, passenger waiting chairs, stairs we do disinfectants," he said through a press release be accepted.

PT BIJB requested that prospective passengers not worry and not believe the circulation of rumors and hoaks which reported that the Minister of Transportation Budi Karya Soemadi contracted the corona virus on March 3 in Kertajati.

"The landing process of ABK Diamond Princess some time ago the airport security and health procedures have been carried out, even after landing the ABK landing at the time the airport was immediately sterilized," he concluded. (mdk / ded)